The Island of Hawaii: When you think of warm days and lush land and the exotic allure of Hawaii, this island is what you are envisioning in your mind that you can experience as a reality, a precious one.  If you only have time to explore one of the Hawaiian Islands, I would recommend you make it the island of Hawaii.  There are entire books written on it, I bought two different ones when planning my adventures to the Big Island because there is so much to see and do on the island of Hawaii.

Off-roading on the side of Mauna Kea about 11K feet high:

On our first trip, we explored Hilo town with its quaint open-air restaurants and easy access to the ocean.  Then made our way up toward Waimea and into Waipio Valley.  But a major highlight was our voyages into Volcanoes National Park and up Mauna Kea summit to the observatory.  We did this all in four days, including my brother’s championship basketball game (he won!).  We kept costs low by staying at the Hilo Seaside Hotel for under $100 per night and it had A/C!  And of course, we rented a Jeep.  So on to the nitty gritty…

Waipio Valley,  25% grade means you need to rent a vehicle with 4Low capability and know how to use it, but it is worth it!  In the valley there are cliff sides with waterfalls shooting into the ocean as well as waterfalls in the back of the valley and one of the best black sand beaches I have ever seen.

Volcanoes National Park: What an amazing park!  Start your day with a drive to the park ranger’s office to get information about the park and listen to the guides discuss how the volcano formed the island of Hawaii.  It is just incredible.  A big shout out to the park rangers that shared their knowledge with me!  See the shards of glass made by the hot lava turning into Pele’s hair to gain some understanding of where the ancient stories are born.  Then hike the Kilauea Iki Crater.  Literally, walk down into the crater of an active volcano to feel the heat seeping out of the steam vents and smell the poisonous Sulfur.  See the new growth and the native Ohia plant and learn the beautiful mythology behind its name.  Explore a huge lava tube and drive the crater rim drive!

Volcanoes National Park: plume of smoke from the Halemaumau Caldera:

The park has huts and lodging to stay in.  The huts are a great way to experience the park at an affordable cost of approximately $80/night.  The restaurant at the Volcano House has a surprisingly down to earth feel with affordable food prices and staffed by locals spreading true Aloha.  You will overlook the volcano’s plumes and look for Pele while sipping on a coffee or a Mai Tai.  I remember seeing an article in the Hana Hou magazine of this restaurant and thinking it was only for the wealthy but that I had to go there one day.  Now, having been there several times, I just laugh at my old thoughts.  There is a reverence about the restaurant but it is completely available to all.

Wait for nightfall either above the volcano or below in Kalapana to experience the glow of the lava.  We did both, and both are unique, extraordinary experiences.  Think about your party’s capability—do you need a break and just want to hang out on top of the park to view the nightglow of the crater or does your party want to hike for miles (or bike ride) down to the lava flowing off the newly formed cliffs into the ocean?  The latter requires some physical activity but is still kid friendly and is open 24 hours a day.  The Kalapana lava flow is however a good hour or so drive outside the park, so plan accordingly.  Seeing lava flow into the ocean only to be crashed back into the cliffs due to the moon’s tiding waves is a once in a lifetime experience.

On a different day you will want to drive up the mountain of Mauna Kea taking in the diverse terrain along the way.  Driving the Saddle road you will notice the terrain change as the elevation climbs.  I rode in wonder while Matt drove me on the roads carved through lava fields and I glimpsed at the contorted shrubbery growing in spite of all odds for miles and miles.  We arrived early for our tour at the Mauna Kea visitor center where a small but rooted group of protestors lined the ditch across from the parking lot.  We had already noticed a few service roads etched on the side of the mountain that our Jeep was itching to explore, so off we went!  To kill the extra hour we slipped and slid our four tires alongside a 14,000 ft. mountain to a point of no passing.   We snapped a few pictures and unable to turn around we reversed our way back to the parking lot (#worthit).

The Jeep’s leading to the top of Mauna Kea:

The tourist vehicles of choice lined up in a row, as if in a Jeep commercial, we all rode high into the clouds of Mauna Kea on the dirt pitted road. The tour was humble and casual but we saw expensive telescopes inside and out.  For me though, it was an excuse to get up to the top.  We had another hour or two to kill before sunset so we walked along a random designated path that lead to what was referred to as the umbilicus of the islands.  A sacred place.  We stumbled upon this site not realizing the honor it was to witness this lake at 14K ft. above sea level where it is believed to be the birthplace of the islands.  Taking three steps at a time because altitude sickness is a thing, we made it back to the Jeep and bundled up as the cold set in for the light show to begin.  Sunset was epic.  There was a cloud layer below and above the sun, making for a mirrored color effect while the sunset.  The temperature dropped rapidly and we would run back and forth from the car for warmth between moments of snapping a photo.  If you plan any sunrise or sunset on Mauna Kea or Haleakala plan to bring a blanket or enough clothing to actually enjoy being in the open air.  After sunset we drove down to the visitor center again for hot cocoa and stargazing.  They pulled out telescopes and pointed them to different planets and stars.  I saw Jupiter’s rings in one of the telescopes!  After we were thoroughly humbled by the vast and profound universe we began the descent taking with us a new perspective on the land we live.

If you plan to go to both National Parks in the Hawaiian Islands you may want to get a Parks Pass, these can be bought at any National Park for under $100.  It gives you admittance to any park in the nation.

Want to read more check out “Beard and Booty” here and follow them on their Instagram for more amazing photos.

Photos of the sacred place (the lake on top of Mauna Kea):

Trail inside the Kilauea Iki Caldera with the native Ohia plant in the foreground:

Pele’s hair in the museum located in the park: 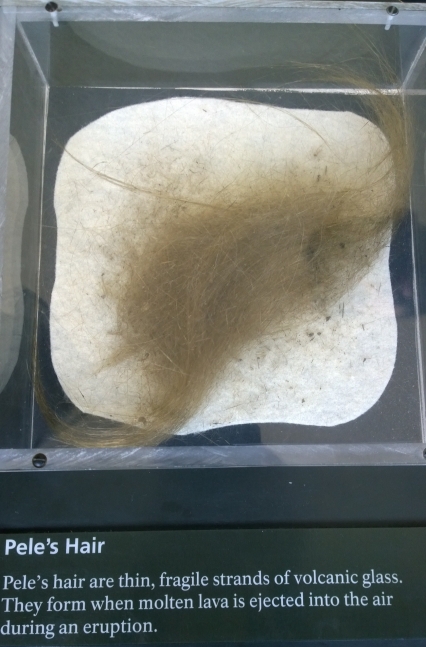