Teaching in Taiwan: So far in my time in Taiwan I have taught first at an international American high school in Tainan in the south of Taiwan and then at a private secondary school in Taichung in the center of Taiwan. My time at the former was fantastic, my time at the latter was an absolute nightmare and one of the worst experiences of my life.

Pro: For the most part, I absolutely loved my coworkers at both schools and felt we all shared a good comradery. A good working environment and actually bonding with teachers on not just a professional but personal level, especially considering we are from all over the world, isn’t always common in teaching abroad.

Pro: It is very easy to save money on a teacher’s salary in Taiwan. Typical starting salaries for a full-time teaching position range around $65,000-$70,000TWD before tax, a little over $2100USD. Part-time teachers or teachers being hourly should expect between $600-$800TWD an hour usually. The government does tax foreigners 18% of their salary for their first six months of your working year but this is then dropped to 5% for the next six months and you are then able to get 13% of your taxes for the first six months back as a tax return when you file the following year.

Pro: Private and international schools should offer paid winter and summer break which should add up to around 3 months of paid vacation. Public schools and language centers do not.

Con: Several schools in Taiwan emphasis the importance of getting good grades, generally offering grade curves and make-up tests, almost to the point where good grades are practically given in order to satisfy the demands by the parents. This is because the grades students initially get qualify them for only certain high schools or secondary schools, and, in turn, those grades earned qualify the students for certain universities based on their scores. Simply, high marks equals better schools, low marks equals less desirable schools. Students cannot even apply for prestigious schools and universities if their grades are unsatisfactory.

Con: Unfortunately, based on my experiences, foreign teachers are also generally treated with jealousy and envy. Often this is because foreign teachers make around double the salary of local teachers, even in the same subjects, and are sometimes given other privileges like smaller class sizes. Because of this sometimes less support is given from local homeroom teachers when it comes to discipline or other problems where help is needed in translating or finding a course of action to resolve an issue with behavior or grades. In other words, you’re on your own.

Con: Some other things that bothered me was the excess of paperwork and lack of technology in my classrooms in my private secondary school, which is common in a lot of local Taiwanese schools. It was a norm to speak to a class of 25-50 students using a microphone, using zero technology, and relying almost entirely on packets of worksheets as your prime teaching material. It’s an outdated and ineffective teaching method considering I was taught like that a decade ago.

Con: Another issue was punishing students. Seeing teachers in my secondary private school yell at their students at the top of their lungs, making them stand and face a wall silently, and making them write hundreds of lines as punishment. I saw it as an embarrassment to teaching and basically a form of corporal punishment. If you have to scream at a twelve year old or make them stand on one leg to get them to obey you then you’ve made some serious errors in your teaching methods. My general methods were to move problematic students’ seats away from their friends, give them extra homework, penalize their grades, and, at worst, contact their parents to discuss the issues and how we can resolve them amicably.

Con: I absolutely loathed my director at my private secondary school in Taichung. She would sleep in her office in plain view random hours of the day, would regularly respond with rude or condescending remarks, and offered zero teacher support. Some prime examples were asking her for visa support and guidance, which is a norm in any country and was even written in the school’s teacher handbook, but being met with her saying she didn’t even know I didn’t have a visa and then “it’s the responsibility of the teacher to take care of their own visas and residence cards.” Another issue was not being paid on time and then having my pay date changed four times over the next week. I put in my resignation with notice without a second thought after only a couple of weeks of teaching at the school which was a small notch above a scam.

To legally live and work in Taiwan as well as acquire insurance, a cell phone number, own a vehicle and rent a residence legally you need to get a work permit, upgrade it to a resident tourist visa (depending on your nationality, Americans are tourists, South Africans and Canadians are residents), and then an ARC (Alien Residence Card). I might have done almost all of these things illegally so there are many loopholes, often times just being polite goes a long way….

For your work permit (which is your employer’s job to handle):

For your visitor’s visa:

Motorbike Accident: In Taiwan, the bigger vehicles have the right of way and turning right at a red light is illegal. I was unlucky enough to get into a motorbike accident my first week in Taichung. I was on a major road, driving to work in the rain, and the scooter in front of me sped off at a green light but hydroplaned and crashed. He crashed right in front of me and I didn’t have enough time to quick stop properly in the rain so I chose to throw my own bike over to avoid colliding into him. I was extremely lucky as no one from behind hit me, my phone which was sitting in the open scooter compartment got lodged into it instead of getting launched into the street, my bike only suffered minor cosmetic damage and my knees were bloodied but I had no serious injuries. Even though I was break dancing on the floor I was still able to get up and drive away.

DUI Checkpoint: The legal limit for driving in Taiwan is .25 if it’s a breath test and .05% if it’s a blood alcohol test. I was unlucky enough to get caught in a DUI checkpoint by 3 police officers the night of a local holiday and was asked to blow into one of those light up batons used to direct traffic. Confused, I told them I didn’t understand. None of them spoke English so after Google translating I still didn’t know how long I was supposed to blow or if I had to put my mouth onto the baton. They made me blow into it 3 times and were visibly upset because I admitted I had been drinking but was under the .025% legal limit for the breath test – they wanted to fine me considering the DUI fines start at around $25,000TWD. I decided to play the dumb, nice tourist card instead of getting angry and potentially escalating the situation and they eventually let me go after a few minutes of arguing with each other. They didn’t even ask for my license, registration, or insurance….

Hiking in Taiwan: A big reason I came to Taiwan was for the wealth of and easy access to nature. Unfortunately, Taiwan’s hiking consists of primarily walking up wooden planks with big gaps in between where adventurers have to hold onto ropes and handrails for the entire duration in order to keep their balance. A bit disappointing to say the least compared to what I’m used to. 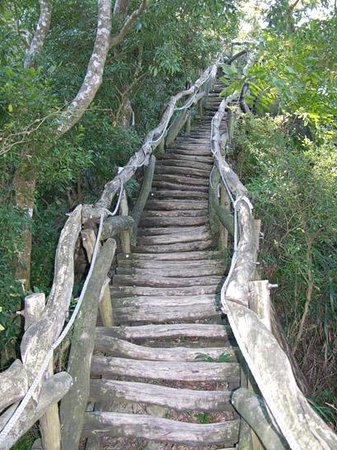 Hiking with my Taiwanese friends