Why did I end up in Washington D.C.? Truthfully, why not? It was my birthday that week, I found a $130 round-trip plane ticket, had a few old friends living there who I didn’t mind visiting, and wanted to see what the difference was seeing DC on a field trip as an 8th grader as opposed to a soon to be twenty-eight year old man. What was I trying to find? Hidden gems. Every tour guide can tell you about the Lincoln Memorial and the Smithsonian museums, but not all can tell you where to get the freshest oysters on the half shell, the best food trucks, or where to tailgate before a pro baseball game – but I can. 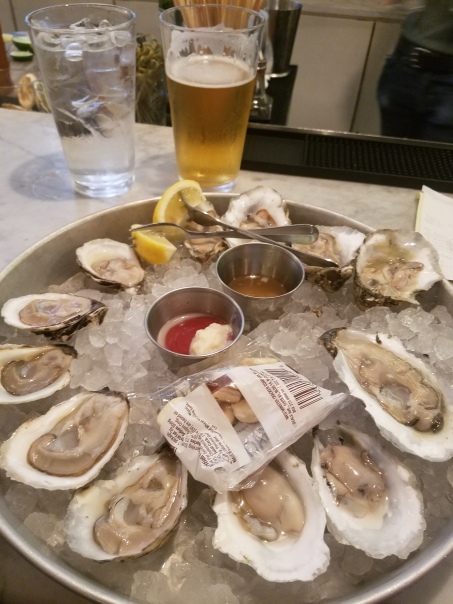 Spent my first night in DC exploring “Barracks Row” and found some awesome spot like Hank’s Oyster Bar and the Barrel where I indulged in a variety of a dozen oysters on the half shell, blood orange cheesecake, local draft beers, and then ventured into a whiskey lounge where I blew some hard earned cash to sip some proper, aged, single barrel whiskeys like Blanton’s.

Food trucks are everywhere in DC, but surprisingly expensive! A soda costs around $3 and simple meals like a cheeseburger and fries will cost around $7-$10. However, I spotted a Vietnamese food truck and couldn’t resist. I ordered and started a conversation using only Vietnamese. The staff couldn’t believe it and complimented my pronunciation. I got a “bun bo Hue” a type of beef noodle soup that originated in Vietnam’s ancient city called Hue. I’m used to it costing less than a $1 in Vietnam, here it was $11, but I have to say it was as authentic as it gets. 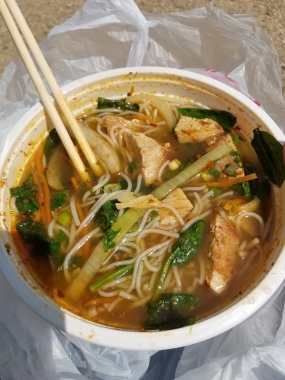 Inside of the United States Botanic Garden!

The Bullpen is a tailgating space located right next to the Washing National Stadium which is basically a parking lot surrounded by shipping containers with a giant projector screen playing the game. People come to tailgate and some just decide to stay in order to save on tickets and food and drink prices as well as not have to deal with the lines.

I’m at the Nationals vs. White Sox game. I have no idea what the hell is going on, but I’m enjoying myself.

Today, I realized I’ve been doing seafood wrong the entire time I’ve been in DC. The Wharf in DC has a selection of dockside seafood markets offering FRESH lobsters, crawfish, oysters, clams, blue crabs and more for less than half the price you’d get at an oyster bar or crawfish restaurant. Today, I got a pound of crawfish for $6 and half a dozen oysters for $8 all ready to eat with sauces and seasonings. Then, I simply strolled to a pier bar that allowed outside food and washed it down with a cold Pacifico and enjoyed the view. Mistakes were made, but I’m glad I got to eat like a local at last.

The inside of some of the Smithsonian Museums and National Gallery of Art. 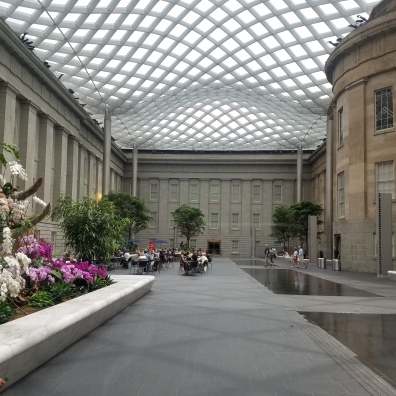 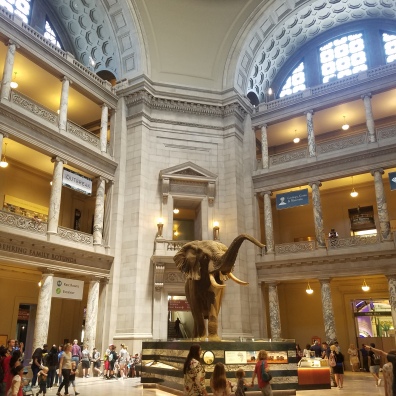 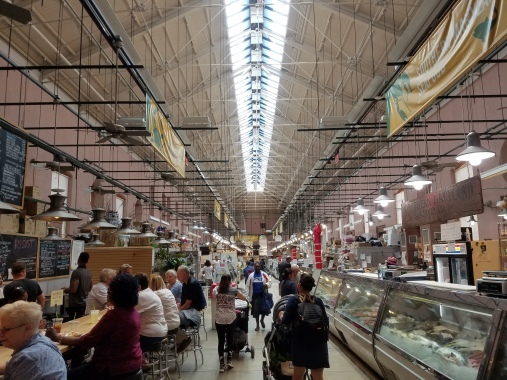 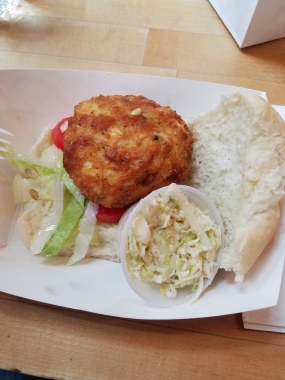 I’m used to a life in southeast Asia where you have to always be on guard. Dog thieves, motorcycle snatchers, pickpockets, mafia, corrupt police and more. Today, I decided to learn the DC metro and within 5 minutes of trying to figure out how to purchase the right pass a woman randomly walks up and asks if I’m trying to purchase a metro card. Before I could even respond, she tells me she has an extra metro card at home and hands me hers. Shocked, I just tell her thank you and she smiles, nods, and walks off. My point being, and what I’ve been preaching, kindness is free. Not always the act itself, but the choice to be so is. “Be the change you wish to see in the world”

Say what you want about Trump, but his hotel is an awesome piece of architecture!

So, in DC people tie their dogs up outside of a business when they want to go shopping and it’s not considered a big deal. Well, being me, I thought all the good boys deserved lots of pets and wanted to take a selfie with yours truly. Meet my buddy big, good, blonde boy. 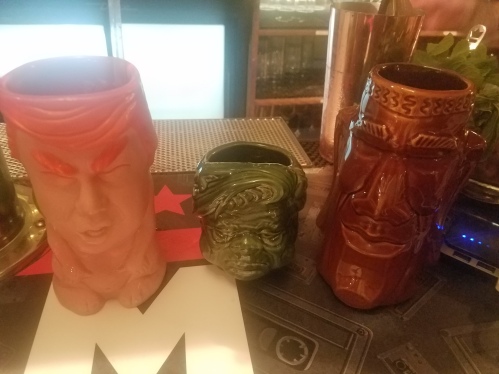 This bar, called The Barrel, had an underground dive that acted as a separate entity, but shared the building space. The bartender ironically had a Vietnamese wife and I wrote down some compliments for him to write to her. In return, he gave me some free drinks out of these tiki glasses resembling Trump, Obama, and someone who I don’t recognize.

I get all the time how people are jealous of my travels or are living vicariously through me. Truth is, there are plenty of days when things go wrong, bad weather, delayed flights, unbearable crowds, getting sick, traffic jams, or, in this case, seeing the famous Tidal Basin drier than a bone. In the end, it’s all good, no one died and I still got to see and do some amazing things. I’ve drank wine in the Eiffel Tower, stood on top of Hitler’s bunker, and celebrated New Year’s Eve in Amsterdam. Life is always worth living no matter your past or current situation.

I quickly realized that in DC the majority of attractions are grouped together. The easiest way to get around is to use the metro, rent-able scooters which are everywhere in DC, or walk. I prefer walking because I stumble upon the best little hidden gems that way. And, when walking, the US Capitol and the Washington Monument are basically your North Stars for when you get lost or second guess your location.

These scooters are everywhere in DC and rent-able through multiple phone apps. I never tried one because, to be honest, I was worried I’d start driving like I was back in Vietnam. Running red lights, not yielding, and having a complete disregard for life and the laws.

My birthday gift to myself was a box seat to see the National Symphony Orchestra. I was the only one wearing jeans, a sweater, and sneakers in the Kennedy Center Concert Hall, but I also had one of the best box seats in the house. Throwing myself into concert halls and quickly learning Aaron Copeland, Manuela De Falla, and Antonin Dvorak.

When you’ve been exploring the Smithsonian museums for the past 6 hours and walked over 7 miles somehow.

Flying out from BWI Airport at 6am didn’t seem like a bad idea, right? Nope! The security line was so overwhelmed it took nearly an hour to get through and people were visibly upset. I came with plenty of time to spare so, for the most part, I just turned on Pandora and let it ride as complaining wasn’t going to do me any good! 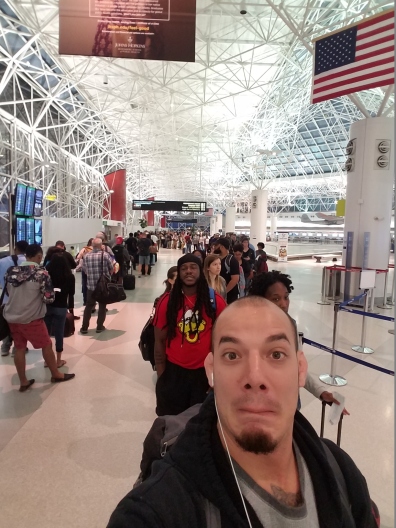